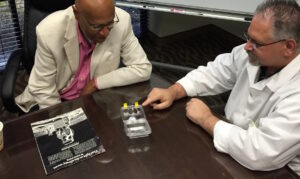 On January 16, 2015, Precision Optical was privileged to host Hildreth “Hal” Walker Jr., an early pioneer in the field of laser telemetry.  He was one of the key historical figures responsible for the design and operations of the laser-ranging project that took place as part of Apollo 11’s “first man on the moon” mission.  Working on the science and engineering operations team at Lick Observatory in California, Hal is the very man who fired the first laser shot that measured the accurate distance to the moon!

Mr. Walker began his laser telemetry career in the laser technology industry in 1964 at KORAD Laser System, a division of the Union Carbide Corporation.  While at the Hughes Aircraft Co. Electro-Optical and Data Systems Group, he also participated in developing and placing the first tactical target designator system into the U.S. Army’s inventory.  This technology is currently displayed at the Smithsonian Air and Space Museum.

Collaborating with famed Apollo 11 astronaut Buzz Aldrin, Hal was the field operations manager for the Lunar Ranging Experiment (LURE) which was designed to measure the precise distance from the earth to the moon with a pulsed crystal-ruby laser beam.  Prior to Apollo 11, laser pulse measurements reflected only from the surface of the moon, where the curvature of the moon’s surface lengthened the return pulse, thereby generating a ranging uncertainty of several hundred meters.

After Buzz Aldrin’s successful placement and alignment on the moon of the LURE targeting retroreflector array structure, which included 100 mounted corner cube reflector elements, laser light reflected from the array would return back to its point of origin on earth with very low angular deviation (narrow angular spread of photons) and high coherence.  This low angular deviation and accurate time-of-flight measurement would then allow scientists to calculate the earth-to-moon distance within six inches of the true value!  This was a groundbreaking achievement that would lead to many discoveries of science, including more precisely quantifying the size of the earth and moon, understanding the wobbling 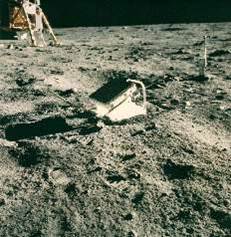 motion and internal structure of the moon, and a greater understanding of the nature of gravity 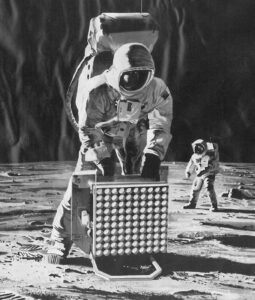 After Apollo 11’s lander team was safely on the moon, the astronauts placed the reflector apparatus, called the Retro Reflector Experiment Package on the moon’s surface.  During the two weeks that followed the placement of the array on the lunar surface, there was a race between the U.S. and the Soviet Union to successfully fire and record their round-trip laser beams.  Although the U.S. was the first to land a man on the moon and manually place an array, what many people do not know is that the Soviets had earlier robotically landed their own reflector array, which however failed to operate properly.  So the race was on between American and Soviet laser teams to hit the American retroreflectors and claim the first accurate ranging measurements, and claim their own country’s place in history.

But the Americans could not be beat!  “Don’t let the Soviets hit our mirrors with their lasers!,” Hal’s team was told.  Then, after nearly two weeks of bad weather and gigawatt-powered trial & error shots, Hal Walker’s team at the Lick Observatory in California, aimed, fired, and successfully hit the retroreflector array on the Moon.  Portions of the beam reflected back to a laser receiver with excellent precision.  Following this historic measurement, many other organizations and countries have targeted (the now several) lunar arrays on the moon. 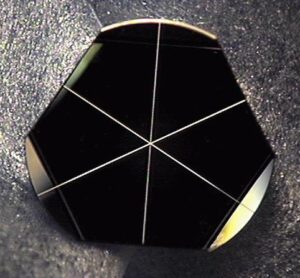 A retroreflector array consists of a series of mounted corner cube elements.  A corner cube is a prism with the unique ability to return an incoming beam of light directly towards its point of origin regardless of the beam’s angle of entry.  This property makes this prism type ideal for a wide variety of applications, such as laser resonator cavities, land surveying, space vehicle approach & fly-around, and a variety of range-finding applications.  In the case of lunar ranging, highly precise corner cubes prisms are needed to successfully return the laser beam to its point of origin after a round trip of nearly 500,000 miles!  Precision Optical was proud to support the LURE mission by manufacturing some of the extremely precise corner cube elements for the program over 45 years ago!  To this day, Precision Optical still makes some of the highest quality corner cubes in the world. 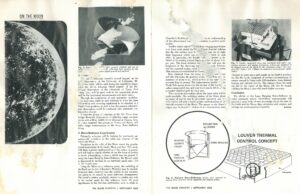 One of the major benefits to the world from the success of the LURE mission experiment is utilizing lunar laser ranging methods to very accurately trace the movement of the earth’s continental plates.  This enables scientists to gather data that can assist in the future of predicting the occurrence of major earthquakes.

Since retiring from development work, Hal and his wife, Dr. Bettye Davis Walker, founded The A-MAN Inc. STEM International Science Discovery & Learning Center in 2008.  Its mission is to utilize STEM-related projects as a motivational tool and advance the educational achievement and the intellectual and career development of African-American, Latino and other minority students from pre-K thru 12th grade. 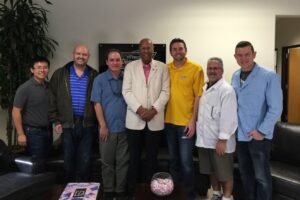 Precision Optical is looking forward to working with the Walkers through our education program, the ELOEP.  One upcoming collaborative effort that we’re excited to participate in along with the GeoSTEM Alliance — an alliance of educators, scientists and engineers, that includes after-school program partners such as the Walker’s A-MAN, the Copernica Institute, the Optical Institute of Southern California and others will be developing a series of optics & photonics range-finding & robotics kits for students.  The kit, which will be named the “Hal Walker Jr Apollo 11 Laser Ranging Kit”, will include experiments that exhibit the same properties as the original LURE experiments in safe, inexpensive, portable kits used for education and outreach.